We were on a tight schedule as the Hotel informed us that they didn’t normally serve food on a Monday so required us to eat at 6pm. A quick run back and shower and we were ready for Ernie’s Evening Entertainment. Mr Captain worked particularly hard during this trip, more to come later.

Following a hearty breakfast it was off to the borders with trip to Goswick Links just short of Berwick on Tweed. Scoring was very similar to Monday but with a surprise appearance in the winners’ enclosure of Andy Minshull following a few barren years. It was a day of surprises with Barbara Johnson outsmarting the men with a nearest the pin on the 15th.

Ernies quiz was now followed by a game of Killer Pool utilising the pool table in the bar. A misspent youth saw Jay Chambers taking on all comers in what was a follow up to his exploits in Turkey.

It was off to Bamburgh Castle next and it did not bring back happy memories from the last time we were hers pre Covid in 2019. The weather that  day was biblical and only about 6 people went out and only four finished. It seemed like Groundhog day again as we were greeted with a howling wind and torrential rain. We waited about 30 mins and most people agreed to go out, eventually the weather calmed and all 28 took to the course. This was a particularly challenging course with 6 par 3’s and the wind and rain ensured that three of them had an untouched green despite 28 people trying for a nearest the pin.  Still Steve Payne and Rob Goodwin-Davey managed to get 2’s to share the money.

A valiant effort from Dave Baynes just failing to catch Brendan (I’ve no chance of winning anything) Brady. So how did that affect overall  results and the winner of the Wales ( we may have to rename it) Trophy.

It was finally time for the much anticipated Captains Cup at Denton Golf Club home of our much loved captain Ernie Rowlands. The day required a strong pair of sun sunglasses and even stronger stomach as the order of the day from Mr Captain was a loud shirt or a forfeit to be paid. As you can see below the majority conformed and those that didn’t were chased up by Frances Sinnott to put a fair contribution/fine into the charity fund.

A good turnout of 29 golfers, due to a late arrival no names no pack drill, teed off. The Captain led the first bunch away and with his experience of course advised them of the approaches. The weather was kind to us and the course was in fine condition. I’m not sure what the Denton members thought of the kaleidoscope of colours wandering around their course.

There were some good scores returned and as is normal for the Portland a  card playoff was needed to sort out the winners. A sneaky attempt by yours truly to provide a different method of result for card playoff was refused and so Joe Boyd triumphed with a better back nine score than Kevin Bolton.

A number of raffle prize donations were provided so the raffle took longer than usual, a mini paint roller kit was declined by all until our President Mr Garner was the last ticket out and had no choice but to take it. Im sure the many alcoholic prizes would have been more to his taste, but he can now paint the town red.

The absence of any 2’s means the pot for Marple  will be well worth winning. 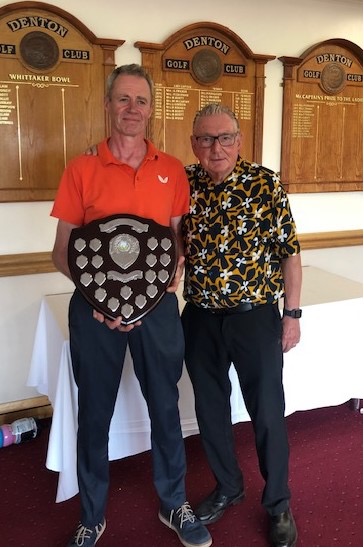 After the sunshine of Turkey it was back to England and 27 members converged on Chorlton. We had a couple of new recruits in Andy Howarth and Derek Atherton.

I have been too busy to write this up and therefore have little recollection of events on the day. Suffice to say Chris Murphy surprised everyone by returning a score of 39 points to push Hart Common winner Mike Smith into 2nd place.

Paul Sinnott claimed a nearest the pin and joined Pete Derbyshire and Andy Howarth in sharing the money for a 2.

The only thing of note that I can remember is the fact that the pies served up for our meal required a pneumatic drill to get into them.